THE G-STELL SEXTANT SYSTEM allows to determine the position of the user deducted from the observation of astres : Sun, Moon, Planets, Stars.

From the earliest ages of human knowledge, the sextant has not evolved for centuries.

Based on the measurement of the height of a star, the use of the traditional sextant requires a good mastery of the instrument, a stability of the user, a visibility of the horizon, a hypothesis on its position and the capacity to use astronomical tables.

STARNAV used the skills acquired in astral navigation to develop an autonomous system able to determine the position of the user by observing the astres.

The system is composed of a camera and an inertial platform. By aiming at an astre (Sun, Moon, Planet, star), without knowledge of the target (recognition algorithm), without visibility on the horizon, without astronomical knowledge, the system determines the position on Earth. 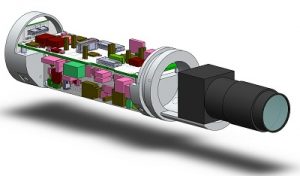 The revolutionary successor of former sextant arrived. A real alternative to GPS now exists, independent and robust to jamming.